Weave the World——Outline a Different Version of the World Map

Fiber art is more than a special type of art. It is first and foremost a method, a path.

From the marvelous structures of nature, fiber artists discover a certain constructivism that governs the microscopic world. This leads to a unique understanding of substances and how they are generated - that every material and object, as a matter of fact, is a fine and sophisticated construct, or rather a fabric, made by nature or humans. Therefore, the essence of fiber art lies in weaving, that is, an impulse to weave out the whole world with a single thread. For those who practice fiber art, everything is weaved, twisted, piled, linked, and spread in their particular way into a form of construct. 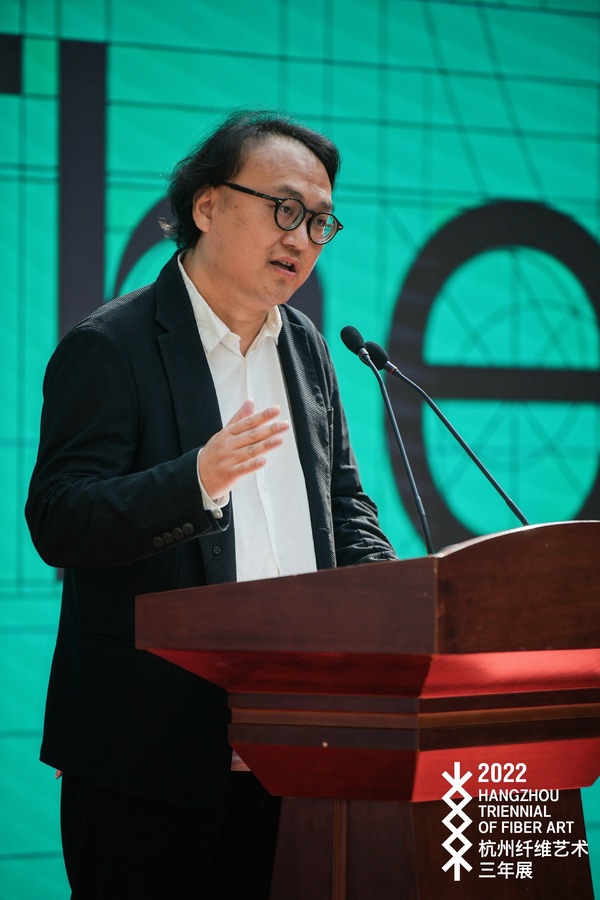 Since the 1980s, the academic team of the China Academy of Art has spent more than thirty years exploring how to develop the subject of fiber art. Along with this, we have held three editions of the Hangzhou Triennial of Fiber Art and this year we are going to hold its fourth edition. Today, the Hangzhou Triennial of Fiber Art, of all exhibitions in Asia, has become the most globally influential academic platform for fiber art and an engine of industrywide significance that drives the creation, exchange, and education of international fiber art. 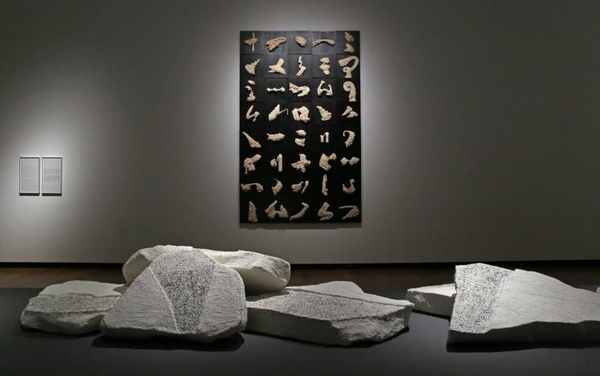 As we are preparing for this year's Triennial in the midst of the global pandemic, we are faced with the multiple impacts of global political and economic changes. This has in turn prompted us to take a more personal approach to consider the value and significance of "fiber" and "art" in the present global landscape. Nowadays, globalization, deglobalization, and the rapid development of digital technology and artificial intelligence have stamped our time with these basic characteristics—globally imprisoned, at-home exiled, mutually connected yet still isolated; in such a context, what kind of appeal should be made by fiber art with it conveying a sense of connection, warmth, softness, and lushness? 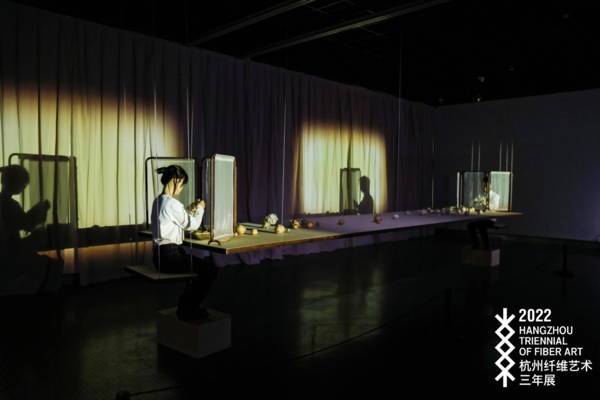 The 4th Hangzhou Triennial of Fiber Art explores the theme of "Being Theoria", which shows the fiber artists' appeal to the world and the contemporary art world—"Being Theoria, And to Coexist", which demonstrates the nature of fiber art. Starting from this appeal, the Triennial elucidates the morphology of fiber art: the "meta-structure" of fiber art begins with a single thread, just as the "single brushstroke" which the Chinese artist Shi Tao used as the root of all his drawings. From "one" (一) to "diagonal cross" (乂) and "upright cross" (十), and then to "double diagonal cross" (爻), "double upright cross" (井), "interlock" (互), "thread" (糸), "silk" (丝), "net" (网)…and other complex and diverse patterns. This is how the world starts from the single line and continually evolves into a sprawling construct of ever-increasing complexity, like the Gordian knot, which seems to be untied only by resorting to violence. Nevertheless, violence is the most unwise move and should be reserved for the worst scenario. From the perspective of fiber art, to lose is to find, and to tie is to untie. The way of untying the Gordian knot lies in the way of tying it. The world is characterized by interconnectedness and inter-causality, like the infinite net of Indra, and its root eventually comes down to that one starting point. This is what is called "Only the essence, an axis as it were, is the centre of the circle". 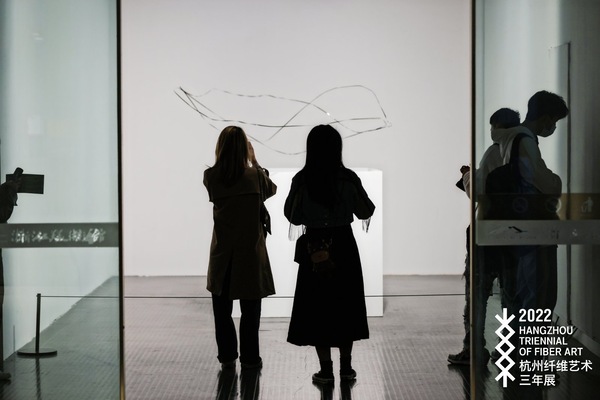 The essence of "fiber" is weaving. Weaving is not just about a particular material or craft; it is also more than an approach to artistic creation and a form of expression. In a more profound sense, weaving is a method and a path for artists to understand the world, an instrument of epistemological and ontological significance. The primitive stitchwork follows the patterns of "double diagonal cross" (爻), "double upright cross" (井), "interlock" (互). These are not only the basic techniques of weaving, but also a primitive form, which then breeds a vision of the world. From the starting point "one" (一), the threads intersects with each other to lay down the structure and order of the world is laid down. Such process is called "weave the world". Over the past decade, fiber art, with its special craft traditions and geographical distribution, has been developing a unique globalization solution. Connecting the places where fiber art emerged and developed around the world, we can outline a different version of the world map.

It may be well known that international contemporary art tends to be centered in the capital cities of Western countries such as New York, Berlin, Paris, and London. However, the heartland of fiber art is Latin America instead of the United States, and Africa instead of Western Europe; the cities are Lausanne instead of Berlin or Paris, Hangzhou and Isfahan instead of Beijing or Tokyo… If we draw a world map for fiber art, we will find that this map shows a different world. Spurred by this completely different vision of the world, the Triennial, with Hangzhou as the hub and fiber art as the medium, links many Asian, African, European, and Latin American countries that boast prosperous textile industries and rich histories of crafts, thus weaving a tangible and colorful "fiber inter-nation". This distinctive world map, intricately woven by thousands of years of civilization, is building a pluralistic and multilateral "international" link, which will become an ever-expanding cultural horizon into the future. 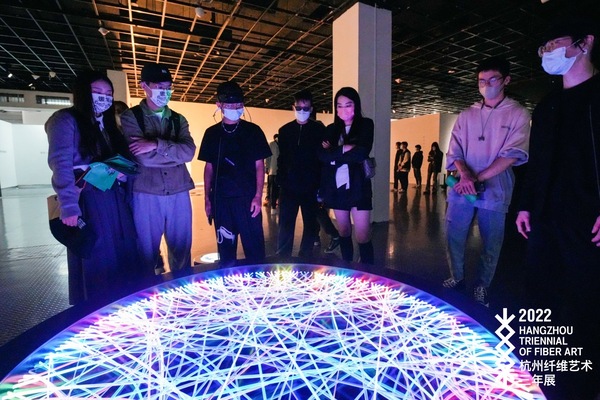 There is always a weaver in the old myths of every ancient nation. The ancient Greek myth The Odyssey tells the story of Penelope's long wait in weaving, and Chinese people have an ancient tradition of knotting a rope to record events. For fiber art, the materiality of an "object" does not lie in its material but in its structure; and it is labor that accomplishes this structure. Thus, the simple yet empowering act of constructing with the hands becomes the only myth in the world. In this myth, it is no longer the "zero-to-one" starting point that plays an active role, but the everyday power of weaving and labor instead. Such labor is linked to a unique "view of invention", which is not represented by a genius scheme and its realization, but what is spread and grown through countless ordinary people’s labor. Such power gives rise to a different "view of creation", which does not emphasize the "zero-to-one" progress, but the endless love and growth. 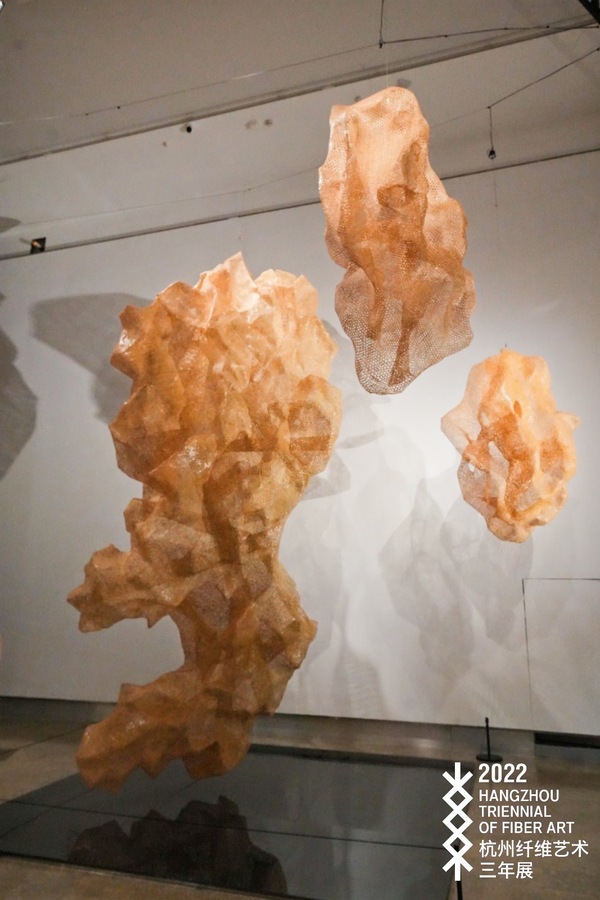 Behind this endless love and growth is a kind of creativity that not only comes from the mother nature of the earth—breeding, spreading, growing and nurturing, but also from the people's everyday creativity characterized by simplicity and tolerance. Such power is linked to a vast and far-reaching world comprised of global workers' thoughts, feelings and lives, a world that we haven't even known of or experienced due to its complexity and ordinariness.

This is the world that "fiber inter-nation" seeks to weave and display. To do so, we need to work with artists-workers around the world and remain rooted in the lives and experiences of the people of all nations (whether The First World or The Third World). In this way, we strive to weave out a new solidarity from the connection of the real feelings and social consciousness of different regions, and create a new power out of the day-after-day labor of the people. This power, which grows quietly yet persistently year after year and accumulates in ordinary and everyday life, can eventually change the world.