Zheng Shengtian – I Was Supposed to Go to Mexico "Zheng Shengtian – I Was Supposed to Go to Mexico," will be presented as a Long March Project at the Long March Space in Beijing since October 16, 2021. The exhibition takes Zheng Shengtian, 1 an alumnus of the China Academy of Art, a seminal pioneer of Chinese contemporary art, whose life and career spanning eight decades, as the subject of a study, seeking to reactivate our historical sense and perception of Chinese art and society in the Revolution/post-Revolution era. It is scholarly supported by the Institute of Contemporary Art and Social Thought (ICAST) from China Academy of Art.

In 2009, Zheng Shengtian launched a website called "Sheng Project," 2 which can be considered as a double-entendre for his personal history and artistic career. It is meant to serve as a precursor of an open archive, offering physical materials bearing the hallmarks of the time he’s lived in to the realm of the public. In 2015, Long March Project and the Institute of Contemporary Art and Social Thought of the China Academy of Art began studying the content of "Sheng Project," taking Zheng Shengtian's artistic experience as a case study and attempting to reassess the narrative of China’s 20th-century art history with an individual's creative life and experiences. This six-year research came to fruition in the form of a curatorial proposal dedicated to Zheng Shengtian, to us, to the art world, and beyond, titled "A Proposal for 'Sheng Project'"3. 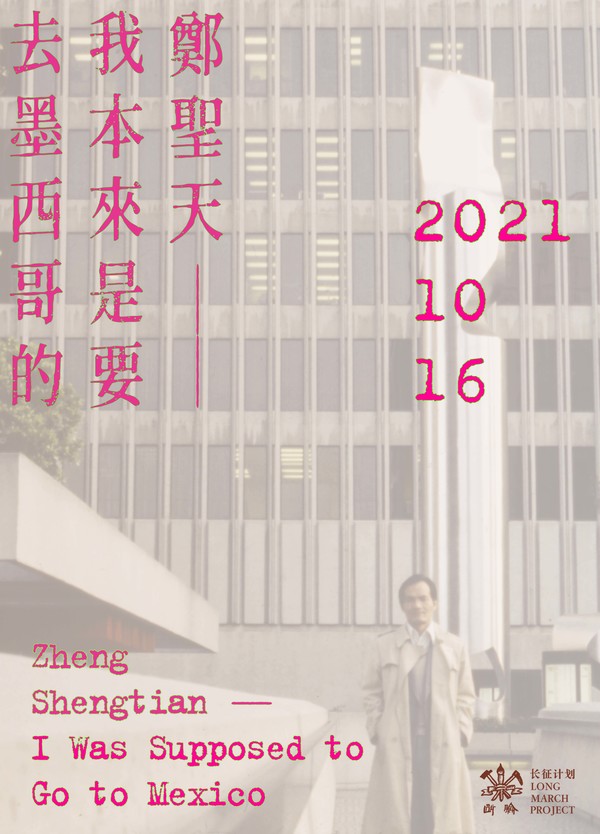 The visual iteration of "Zheng Shengtian – I Was Supposed to Go to Mexico," organized by Long March Project, unfolds based on the core thesis of the proposal mentioned above. It is not a retrospective, as it does not fully represent the complex interactions between Zheng's art and life. "I Was Supposed to Go to Mexico," a remark by Zheng Shengtian when musing on his first overseas training post in the 1980s strikes as profound now. In the 1950s and 1960s, a large number of foreign art exhibitions were showcased in China. Visits and lectures by artists belonging to the international socialist or leftist camp, such as David Siqueiros, José Venturelli, and Eugen Popa, inspired the Chinese art world to draw from a greater variety of sources. These artists experimented in an art system different from the then mainstream Soviet socialist realism, a phenomenon that prompts us to look anew at the fact that from the 1950s, Zheng Shengtian and his generation who were students at the time, began to inherit an international socialist outlook. Initially intending to go to Mexico, Zheng ended up in the United States and became a seminal figure in mediating exchanges between Chinese contemporary art and the West. However, the aspiration to "go to Mexico" has never ceased.

The imagery of the "Zócalo" (the main public square of Mexico City) is used as the driving conceptual motif for "Zheng Shentian – I Was Supposed to Go to Mexico." The Zócalo of the exhibition space is composed of archival materials from Zheng's ongoing research on the artistic dialogue between China and Mexico in the twentieth century. According to Zheng, "My research on Sino-Mexican artistic exchange continues. But I put it into a larger context. Some art historians inherited the historiography of the two camps – the East and West – from the Cold War period and considered Western modernism and revolutionary realism as the two major trends in the development of Chinese art in the 20th century, which alternates as time evolves. Such a view is too simplistic. To a large extent, they ignore that there were alternative trends and practices between these two currents. Of which, neither classifies as officially promoted revolutionary realism nor fully equates with Western modernism or contemporary art."4 When considering the narrative of twentieth-century Chinese art history as divided into a binary of Western modernism and revolutionary realism, this valuable collection of documents exposes the undercurrents and tributaries between these two poles, in their historical complexity. Surrounding the Zócalo are more than 60 paintings by Zheng Shengtian dating from the 1950s when he was a student at the Zhejiang Academy of Fine Arts (now the China Academy of Art) in Hangzhou and later at the Central Academy of Fine Arts in Beijing, followed by works from the period of the Cultural Revolution, and later works created in his time in the United States and Mexico during a government-funded overseas training program after Reform and Opening Up. The 12-meter mobile mural, Winds from Fusang5, co-created by Zheng with Sun Jingbo hangs at the end of the Zócalo. Completed in 2017, seventy years after his first encounter with images of Mexican muralism as a student, this epic masterpiece depicts key individuals and events that have propelled a century of Sino-Mexican exchange on artistic ideas and expression.

Three seemingly independent narratives threads – Zheng Shengtian's personal history, his artistic practice, and his historical research on the subject of Sino-Mexican art exchange – are juxtaposed in the same space. The viewing experience strings together the chance relationships between the personal, artistic, and epochal, bringing forth "two internationalisms." A socialist modernism6 potential was embedded within the various literary and artistic trends that emerged during the New Democratic period of the 1950s, representing one approach to internationalism in the past century. After Reform and Opening Up, Zheng side-stepped into another approach to internationalism, the internationalization of contemporary art. "One century, two internationalisms." Zheng's life informs the historical narrative of three generations that have been divided and disconnected: the so-called "New China," the "New Period" (post-Cultural Revolution), and the "New Century." He sheds light in corners of Chinese art history that have been muddled and obscured by ideologicalized narratives, and recalibrates them within the historical fabric of lived experiences, allowing us to form opinions with a new perspective.

"Zheng Shengtian — I Was Supposed to Go to Mexico" is curated/produced by Long March Project, with the scholarly support from the Institute of Contemporary Art and Social Thought, China Academy of Art. This text draws from the research and writings collectively undertaken by the two organizations.

Introduction of China Academy of Art

Founded in 1928 as the first art academy with complete academic programs in China, China Academy of Art, undergoing changes in name and location, continues to yield outstanding achievements known both at home and abroad. CAA has experienced early hardship, ample maturity and leaping expansion as a vanguard in art. With a mission to revitalize Chinese art, it is in active dialogue with the world and has great influence in the development of modern and contemporary art in China.

Conceived in 1999, Long March Project, of which “A Walking Visual Display” (2002) is considered the inaugural and foundational venture, has become an ongoing curatorial initiative based in Beijing since 2002, with the format of each project deriving from the specific context and concerns each endeavour calls for. The Project was born and continues to grow in the ever-shifting ground between the local and the global, consciously positioning itself where multiple contexts converge in order to probe into the economy of contemporary visual culture, anchored to topics related to artistic production. It creates curatorial projects situated in pluralistic scenarios that allow theoretical notions to be discussed on the same plane as everyday realities, in an attempt to offer new perspectives that see the past as present and pressing as the current, generating future possibilities from today’s artistic angst.