An Ethos of Fortitude - The Exhibition in Commemoration of Pan Tianshou's 120th Anniversary, opened Friday at the Zhejiang Art Museum in Hangzhou, East China's Zhejiang province. The exhibition is the largest presentation of Pan's works, with over 120 pieces of his artwork and manuscripts. Now the exhibition returns to Pan's hometown, featuring contributions he made as an educator and a champion of traditional Chinese painting, its skills and spirit. It also presents Pan's creative thinking and practices on Chinese tradition to inspire artists' insistence today on culture confidence.

The exhibition is composed of six parts: Inheritance of Conventions and Innovations, Peculiarity and Brightness, Flowers in Mount Yandang, Overwhelmingly Imposing, A Noble Character and A Simple Life. Inheritance of Conventions and Innovations

Pan believed that "those Chinese painters, who simply imitate works of ancient people those in the past without the slightest hint of innovation to bring glory on their ancestors, are purely silly descendants." All great accomplished painters in history broke through the set patterns of their predecessors and made innovations their responsibility.

Pan absorbed the strengths of other Chinese painters. He harnessed the essence of all these masters and established a style of his own, surpassing his predecessors. Pan's style is robust, majestic, extraordinary and peculiar, with a magnificent and beautiful inner strength that triggers soul-stirring results. He said, “Each painter has a different style and it is the difference that makes art." The formation of a unique style, "first requires a national style, which differs from that of Western paintings; secondly, it needs new creation and a difference from predecessors; and thirdly, it should stand the judgment of the society and the test of history." Pan visited Yandang Mountain several times between 1955 and 1963. Its deep ravines and beetling cliffs and wild flowers offered him "supreme rough sketches" and Pan composed some of his pinnacle works based on the landscape of Yandang Mountain.

Pan once said, "Wild flowers, masses of weeds and clustered bamboos in the ravines of remote mountains, tall or short, intertwined or disappeared, have a natural and wild quality, a fresh and elegant aesthetic conception, a gorgeous and non-secular character, which are all beyond imagination when compared to flowers in greenhouses." For Pan, Yandang Mountain was not only a painting subject, but also a place of spiritual significance. From the ravines enveloping each other on Yandang Mountain, he learned the beauty of arranging mountains, waters and flowers in an irregular way; from bluffs and cool waterfalls, as well as strange rocks and trees, he absorbed the solidity and firmness in brushwork and modeling. After the Song Dynasty (960-1279), traditional Chinese painting gradually lost its robust and fresh features. Pan’s strokes however, absorbed the vigor of the ink painting of the Southern Song Dynasty (1127-1279) and the robustness of the Zhe School while discarding their bluntness, thinness and rigidity. Pan developed a unique style that aimed at vigor and robustness. No theorist or painter has ever come up with such artistic ideas, and therefore Pan is distinct from not only ancient, but also modern artists. Pan was a firm carrier of cultural heritage. In the first half of the 20th century, there came "a change in three thousand years in Chinese history" and he faced the challenges of modernity with a high degree of cultural consciousness, to rejuvenate the Chinese national spirit with his art and to re-boost the morale and lofty spirit of the Chinese people.

But also, he was a great innovator. He incorporated landscape techniques into the panoramic view of birds-and-flowers, and vibrant mountain flowers into the near landscape, for the creation of the momentous and magnificent format. "For all my life I have been a teacher, and painting is just an avocation," Pan said. In 1928, he was appointed professor of traditional Chinese painting at the National Academy of Art (today the China Academy of Art), and he stayed with this institution for the rest of his life.

Half a century of his life was devoted to China's modern art education. It was his sincere hope that Chinese painting in the new era, as a representative of East Asian painting, could still stand proudly at the top of the world's art Olympus. Pan was upright, modest and lived a simple life. What he left behind for later generations is a book of life that deserves thorough reading.

The exhibition will run until Jan 14. 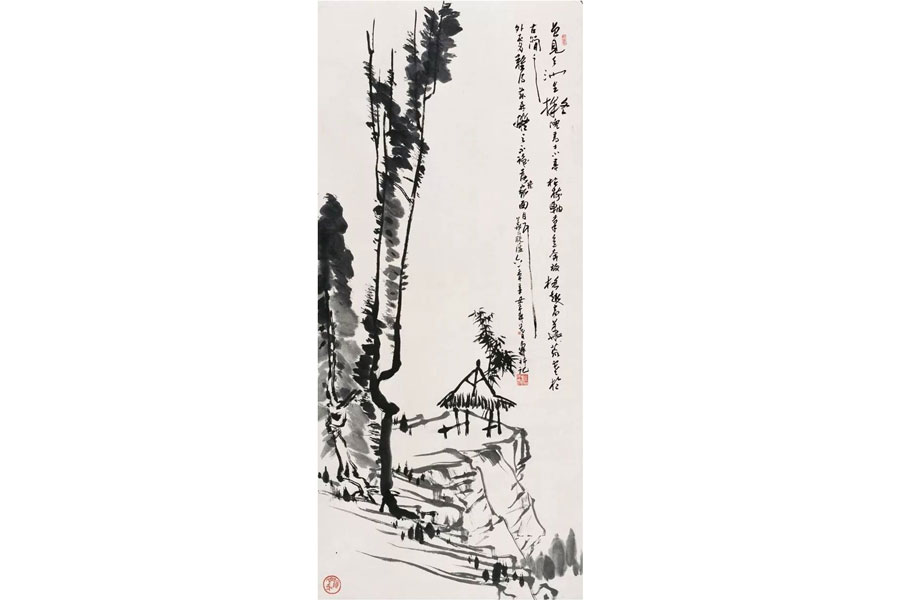 A Pavilion and Withered Tree, 1961. [Photo provided to chinadaily.com.cn] 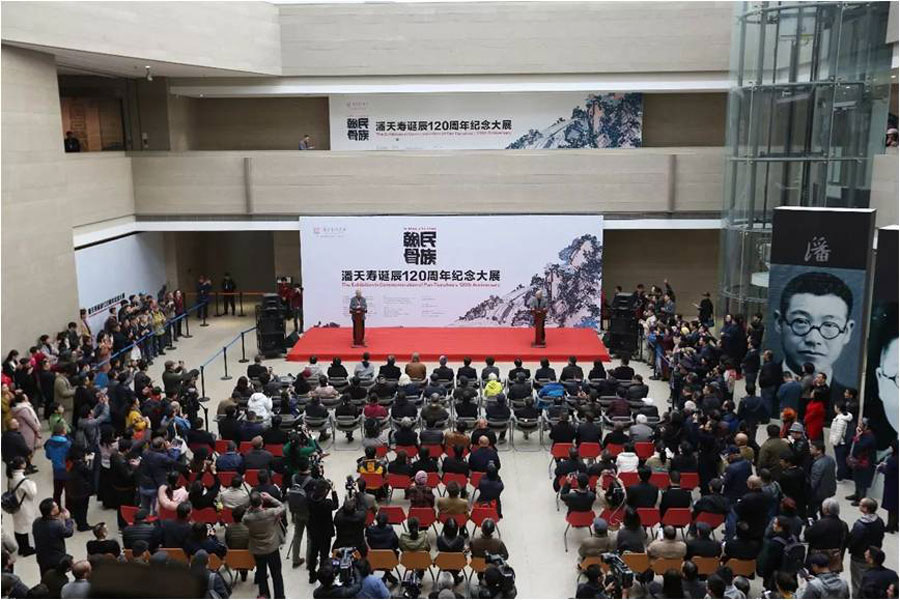 The opening ceremony of the exhibition. [Photo provided to chinadaily.com.cn]