The new China Design Museum, recently opened in the Xiangshan campus of China Academy of Art in Hangzhou, has aroused interest and got the natives talking.

The museum extends a floor area of 16,800 square meters and, apart from the exhibition area, also includes a workshop room, archive center, auditorium, multi-function hall, gift shop, cafeteria and a bookstore that is still in the planning stage. The Xiangshan campus is packed with works from internationally acclaimed architects. Wang Shu, the first Pritzker Prize winning Chinese, designed the campus and most buildings, while Kengo Kuma’s Crafts Museum opened in 2015 is on the top of Xiangshan Hill in the north of the campus.

But the new museum, designed by yet another Pritzker laureate, 85-year-old Portuguese architect Alvaro Siza, seems a bit different. The striking red Agra stone façade stands out in a campus dominated by colors of varnished wood and bamboo, earth walls, tiles and bricks.

“I think Siza tries to talk to the site. He studied the place thoroughly and it’s more like a dialogue,” said Yuan Youmin, executive director of the design museum.

Xu Jiang, president of the China Academy of Art, picked out Siza as the man to design the new museum so he could accommodate their prized Bauhaus collection bought from a German collector in 2010.

Siza came to the campus for the first time in February 2012 with his partner architect Carlo Castanheira.

“Communication with Siza took some time. For such an established architect like him, you have to convince him (it is worthwhile). I think it was our Bauhaus collection that impressed him,” Hang Jian, vice president and director of museums at the academy told Shanghai Daily.

Xu and his team wanted a building that was a bit different from what was already on the campus with more flooring space and multiple functions.

“Sometimes people look for a concept, like a bird’s wing or a lotus flower. We didn’t do it. We studied things according to the program. We believed these ideas came from the site,” Castanheira said at the opening of the museum.

It took 18 months to finalize it while the construction work took a bit longer than usual.

Siza and his team required that all the pillars, air conditioners, fire hydrants, smoke detectors and lights were to be hidden inside the building, which was a challenge for the domestic team.

“For this project there were over 2,000 drawings, many times more than a normal design,” said Zhao Yuanpeng, an architect who was in charge of the project.

Zhao said Siza’s plan was not only about an architectural shape but also the landscape, light and sound effects, windows and furniture; everything had been carefully designed and precisely calculated.

“We kept on designing until the last moment,” added Castanheira. 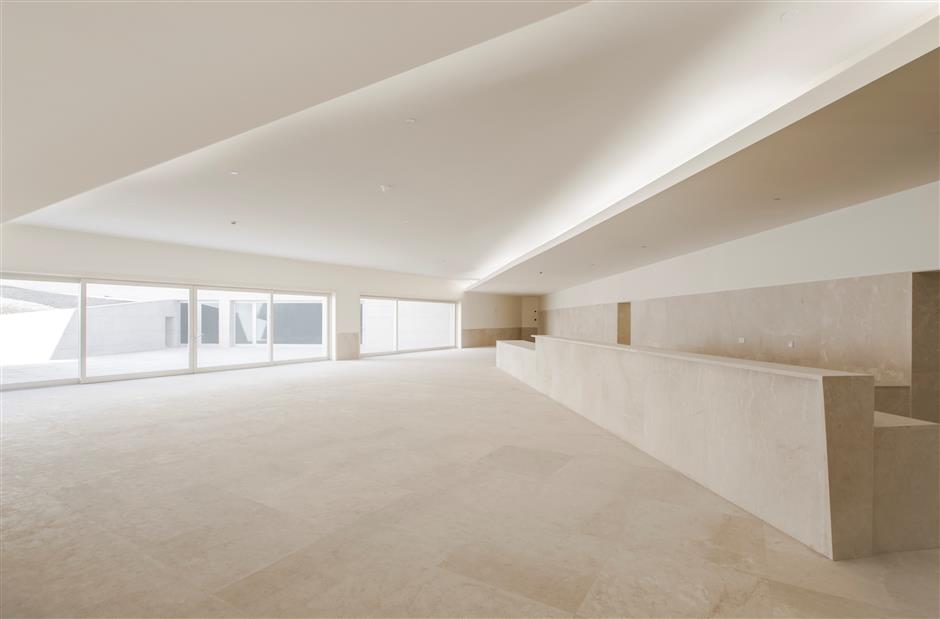 Interior of the museum

Along with the inauguration of the museum, five exhibitions were opened at the same time. “Alvaro Siza — Beyond Architecture” is a retrospective exhibition on Siza’s past productions, including architectural designs, furniture, drink ware, sketching and carpet art.

Three permanent exhibitions showcase some of the core collections of the museum, including 7,010 pieces of Bauhaus and Bauhaus-related modern design, around 36,000 pieces of menswear by Italian clothing designer Massimo Osti and over 100 pieces of Western modern design in daily use.

One of them, “Life World: The Collection of Western Modern Design,” gathers together representative works from more than 130 designers since the mid 19th century. Objects on display include the Barcelona chair, designed by German architect Lugwig Mies van der Rohe, an electric kettle series designed in 1909 and a portable typewriter in the 1960s.

“Design is always related to the lifestyles. So our historic collection enables people to see how our lifestyles have changed in the past 20th century,” said Hang.

A temporary exhibition, “Bauhaus Imaginista: Moving Away,” is a collaboration with the Bauhaus Kooperation in Germany and was carried out by both German and Chinese curators.

The exhibition is also part of a larger international research project that celebrates the legacy of Bauhaus both as an art school and an important movement originating in 1919.

It traces the birth, development and application of the Bauhaus ideas around the globe with archives, prototypes, videos, pictures and objects.

Hangzhou is the first stop on its world tour, followed by India, Japan, US, Brazil, Russia and Nigeria. They will then return to Berlin in 2019 to mark the centenary of Bauhaus.

And one chapter of the exhibition in Hangzhou, which contains Bauhaus’s development in China and buildings and design proposals, will also be shown to an international audience in other parts of the world.

As an avant-garde artistic claim, the Bauhaus school only existed for a short period of time. But curators of the show emphasize the importance of rethinking Bauhaus in a vernacular context.

“It won’t be the same (in different places). It’s not just about replicating Bauhaus, it’s about taking what you want but doing other things too,” said Grant Watson, one of the curators.

Since its opening on April 8, over 45,500 people have visited the museum in 15 days of operation. 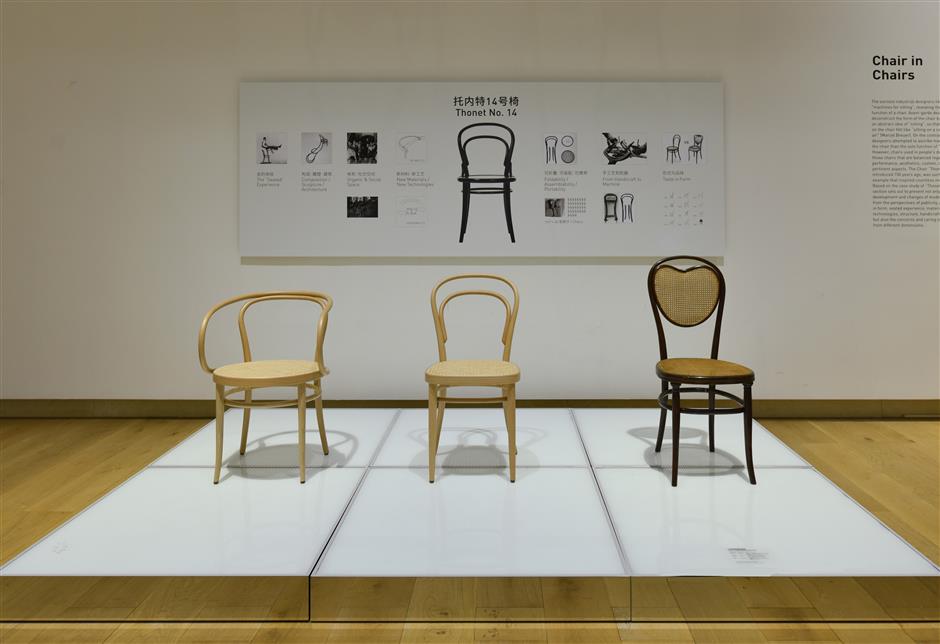 Different variations of “Thonet No. 14” chair

The museum was built and founded at a time when China started to realize the significance of design and more Chinese manufacturers were seeking an upgrade from Made in China to Created in China.

In December last year, the Sea World Culture and Art Center in Shenzhen, sponsored by the China Merchants Group, launched a new design museum in partnership with the Victoria and Albert Museum in Britain. It is Japanese architect Fumihiko Maki’s first project in China, who is also a Pritzker Prize receiver.

“There has been a design fever in China, with various kinds of design museums being planned or built already,” Hang admitted.

But he added that such a comprehensive museum was rare, with both historical and contemporary designs collections and a separate museum building to accommodate them.

“I think we are one of the few in China, and in the world as well,” said Hang.

The academy is working toward acquiring more modern Chinese designs from the past 100 years that echo the Western collection they have already owned.

They also hope to promote Chinese contemporary designs and designers with more exhibitions in the future. And public events including seminars, lectures and workshops for kids and young adults are on-going and free to the public.

There will also be short-term development programs aiming to increase the design quotients among executives and designers.

“I think the museum has several goals. First is education, an education of basic elements of design and its prominent role in the development of the society; second is to present the origins and timelines of modern design, to set an example for Chinese original designs,” explained Hang.

It has already signed cooperation agreements with museums in Porto and Serralves in Portugal as well as other international museums. More inter-museum exchanges, including human resources and exhibitions, are to be expected.

Hang used the word “misread” to describe how Western modern designs could connect with Chinese designs.

“It is like translations of poetry from the Tang Dynasty (AD 618-907), you’ll have to put it in a local context with expressions that can be understood by local readers. It is misread on purpose,” said Hang. “Only when we stand in China’s own perspective, can we activate an equal conversation with the West.” Pieces of stationary design at the opening exhibition 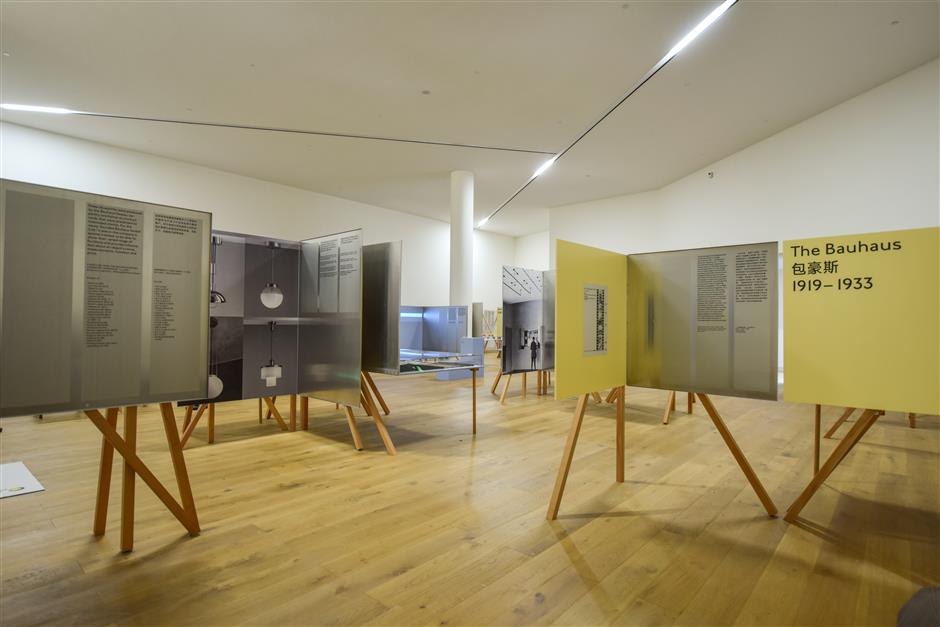