Carving out a name for herself

Instead of painting on canvas, she uses a knife to carve on silver bromide, an emulsion used in photography and film, presenting a new form of artistic expression. The exhibition runs through March 13.

Chen, 52, was born in Hangzhou, Zhejiang province. She graduated from the China Academy of Art, majoring in oil painting, in 1989. Chen proceeded to obtain a master's degree in 2002 and a PhD in 2009.

With government sponsorship in 2000-01, she was enrolled in the Repin Saint Petersburg State Academic Institute of Painting, Sculpture and Architecture, winning the gold medal in the Chinese Youth Oil Painting Artists Award.

She is now a professor, doctoral supervisor and chief of the Department of Comprehensive Painting in the China Academy of Art.

When Chen was little, her grandfather bought a German-made camera. Photos being developed in a darkroom were part of the backdrop of her childhood and she quickly learned the procedures involved. 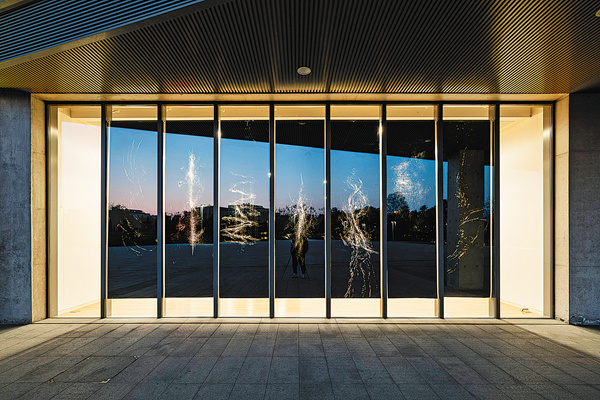 In the Asia Art Center in 798 Art District in Beijing, artist Chen Yan's works stun visitors with her creation of painting on film bromide.[Photo provided to China Daily]

Chen still remembers how fascinating it was seeing the images slowly revealing themselves.

She's also inspired by the perspective of medical X-ray films.

"I'm intrigued by the feeling of seeing through what cannot be seen directly," says Chen.

She claims that painting on these films creates a sense of strangeness and alienation, which allows her to break through from the inertial pattern of oil painting and feel the irreplaceable charm of the material.

Chen considers the film as a relatively uncontrollable medium, as each touch will leave an irreversible trace. And the "brush" she uses, which is a knife or sometimes a stone, strengthens the difficulty of the challenge, as they can easily tear the film. Chen thinks that carving on films is more restrained than painting on canvas.

The two dimensions of the canvas have given rise to a major discussion for centuries, which is how to reflect three-dimensional space and depth on a two-dimensional surface. In the case of film, however, not only is it two-dimensional, the element of color is stripped away as well, so the image is thus more abstract and more uncertain.

"The creation does not attempt to imitate nature, but to express a quality, and the experience living in the world," Chen says.

Chen adds that the film can also be colored of course, by changing its backlighting and so on, and she's going to aim for a more multidimensional presentation.

Feilai Fu, which captures the view she saw on her way driving from home to the studio, was the first series that came out.

Chen spent over a month making hundreds of sketches in the mountains and forests in Feilai Peak in Hangzhou, Zhejiang province.

She etched the rough shape of old trees and vines, the gnarled rocks and overlying peaks of Feilai, onto silver films with iron nails and bars.

Another highlight of the exhibition is a series of works named One Day of Su Shi, which depicts Su's footprints covering West Lake and mountains around.

His influence remains even till today. One of the most famous dishes in Hangzhou, braised Dongpo pork, is named after his courtesy name; as well as a pedestrian causeway, called Sudi, meaning Su causeway. Instead of painting on canvas, Chen Yan uses a knife to carve on silver bromide, an emulsion used in photography and film, presenting a new form of artistic expression.[Photo provided to China Daily]

The series of work was created after Chen went on a field trip with friends, studying historical sites along Hangzhou West Lake and visiting the three inscriptions left behind by Su.

This group of works not only uses lines to sketch the hills and mountains, but also directly rub the texture of the wood and stones into the silver film on the rocky cliffs of the mountains and the overturned gnarled wood, to express Su's tolerance and optimism with this combination.

His life experience was more than traveling around the nation, he saw more than the views in front of him. Chen imagined walking on the same path breaking through time and space, feeling the world as Su did.

"In fact, it's more of introspective observation and reflection," Chen says, "it's one of Su, also one day of our life." In the atrium of the gallery, audiences could see another group of Chen's works, Seven Days, dangling from the ceiling, while the warm sunlight in early winter streams down through windows.

The work consists of seven pieces of 3-meter-long film that can be viewed from both sides. It's inspired by her personal life experience during the pandemic.

The series Seven Days was created in 2020, when the COVID-19 pandemic outbreak disrupted the rhythm and order of people's life and revealed the fragility of human beings. In the era of intelligence and globalization, the pandemic reminded people how unpredictable our life could be.

The work extracts elements from the natural landscape of West Lake, using mountains, trees, rocks and ancient pagodas as images, and a seven-day cycle as a closed loop, to show that one should always be in awe of nature and of life.

"The COVID-19 pandemic seems to change the order of the whole world suddenly. It makes me grow a deeper understanding of such uncontrollable factors. I can only present the content by scraping off the darkness on the silver film, the sense of uncertainty is overwhelming. Just like looking for light in the dark, I shall find a point in the cave," says Chen.

Xu Jiang, vice-president of China Federation of Literary and Art Circles, who's also the director of the academic board of the China Academy of Art, thinks that Chen uses the subconscious line as if she were chopping in the peak.

"When Chen looks into the light, she sees the shadow. She walks in silence, lets nature guides her," Xu says.

A blogger from Xiaohongshu, a Chinese social media platform, who named her account Art NFT, comments, "I've seen many artists working on the canvas with tools, but Chen is the first who smashes the canvas on the rocks."

She thinks this change in creative thinking is comparable to French painter Marcel Duchamp (1887-1968) who presented an urinal, Argentine-Italian painter Lucio Fontana (1899-1968) who cut the canvas, and Italian artist Maurizio Cattelan who stuck a banana on the wall.