THE TAO OF CHINESE CALLIGRAPHY IS THE WAY TO THE WHOLE WORLD EXHIBITION AT ZHEJIANG ART MUSEUM “FROM INCEPTION: WANG DONGLING 60 YEARS OF CALLIGRAPHY”

How do we revitalize the unique intellectual genealogy of Chinese calligraphy in the spirit of cosmopolitan sharing? How can we make calligraphy an always sustainable and open cause? With his indefatigable efforts and constant experiments during the last six decades, Wang Dongling provides us with a meaningful example. For sixty years, he has been tirelessly exploring within the great tradition of Chinese calligraphy and constantly searching for inspirations across the grand horizon of world art. Through the dialectics of "Writing•Non-writing" he returns to the vital fountainhead of calligraphy and opens up its creative space. For calligraphy, he has a grand vision: to revitalize the great tradition of calligraphy for contemporary audiences, to spread the Tao of calligraphy in Chinese civilization to the whole world. For himself, he has a firm position: to remain indifferent to praises and condemnations, favors and shames, to live as he wishes, to do justice to this life.

--- Remarks by President of the China Academy of Art, Gao Shiming 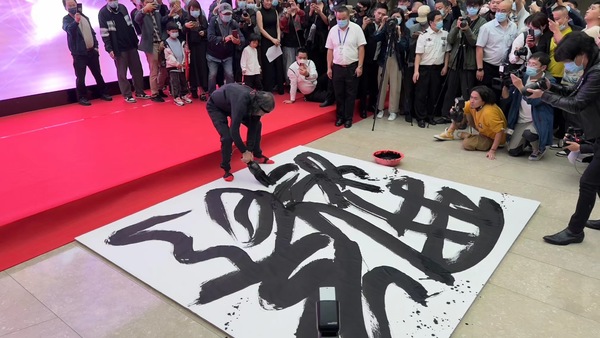 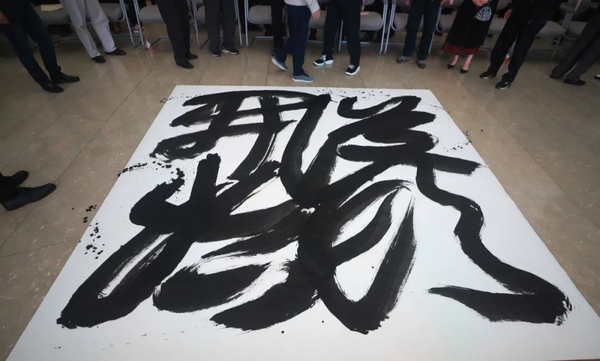 The exhibition delineates Wang Donging's calligraphy art's 60-year path, which is a clear path of calligraphy studies as well as art practice with an open mind. Before him, his teachers such as Shen Zishan, Lin Sanzhi, Lu Weizhao, Sha Menghai, etc. represent the last generation of calligraphers who used ink and brush in everyday writing, the epilogue to the previous two thousand years' writing practice. Ahead of him, in the era of media revolution, Wang Dongling is the first calligrapher who has given serious, in-depth thoughts to the problem of calligraphy's life and death, gain and loss in the future, virtual world. He has an intuitive commitment to the most fundamental problems. 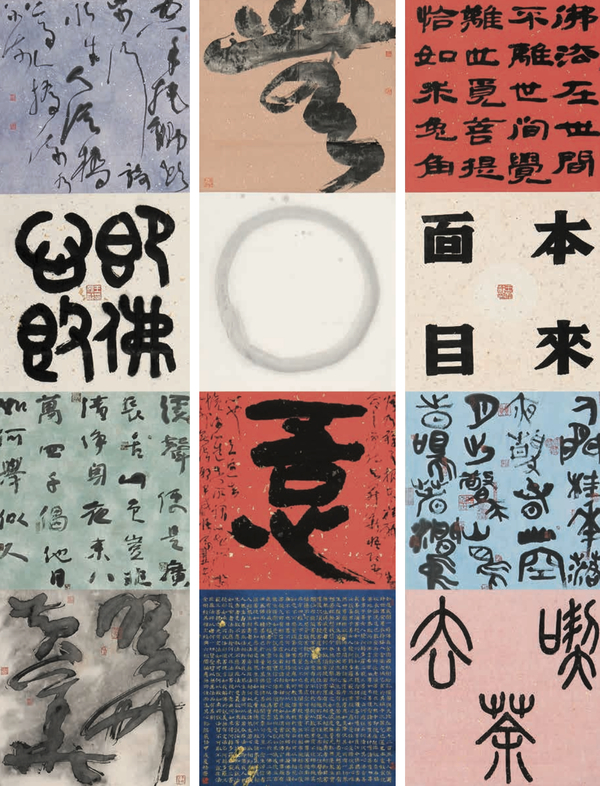 Wang Dongling has been conducting extensive and in-depth calligraphy experiments since the 1990s. He never regards calligraphy as a kind of legacy, but promotes the open, experimental potential of calligraphy so that calligraphy, as an ancient art form, can become a member of the contemporary art world. The hanging scrolls in four scripts in Exhibition Hall No.6 of Zhejiang Art Museum showcase the six decades' creative journey of Wang Dongling. The newly created "Big Writing" installation in commemoration of the 2,500th anniversary of Confucius' passing represents the contours of the journey of Confucius. The shift from Cursive Script of profound traditional depth to Entangled Calligraphy is also a response to the artist's personal life journey. 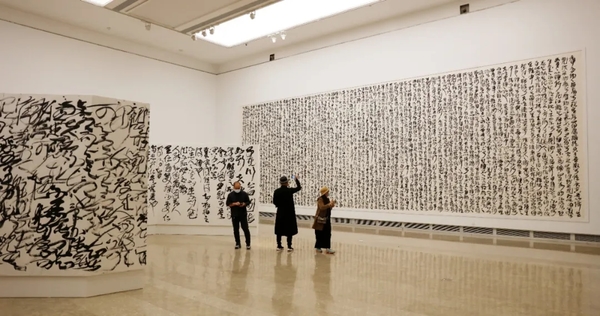 In Exhibition Hall No. 5, named "Scholar's Snow Cave," the small-sized works in Regular Script and big-sized works in Cursive Script encompass calligraphy genres such as album leaves, scrolls, tablet inscriptions, screens, etc. Created with deliberate, meticulous laws and discipline as well as a grandiose, peculiar beauty, these works express the artist's profound immersion and training in the calligraphy tradition and gesture toward bold possibilities for innovation. 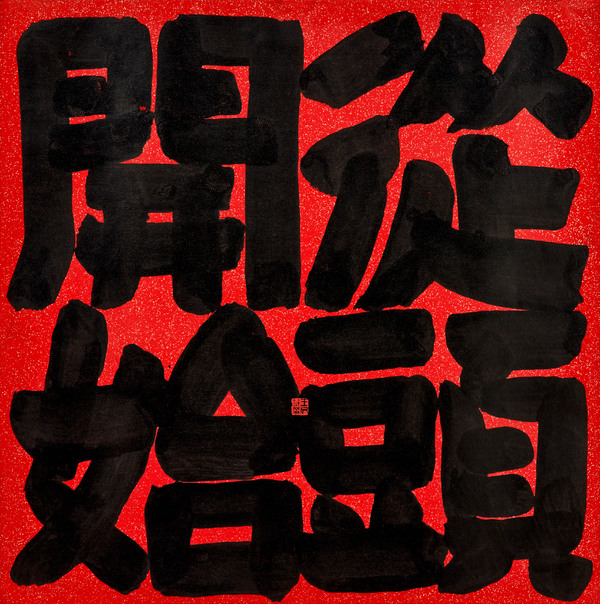 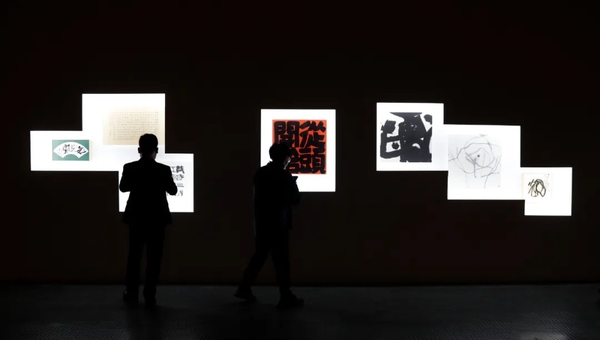 In Exhibition Hall No. 4, named "Fantasy Land of Calligraphy," is a world of colored glaze illuminated by both lights and colors: from abstract ink paintings to silver gelatin calligraphy, to the use of materials like stainless steel mirror and clear acrylic, and to the numerous representations through new media such as iPad calligraphy and motion capture digital art. Externally, it is an innovation of ancient tradition with a contemporary philosophy; internally, it is a return to the original fountainhead, inquiring after the theories behind the Tao of calligraphy; back to the very moment when writing was first born, to the eternity witnessed by gigantic mountains, advancing by retreating, renewing daily like flowing rivers. Above the giant piece in Cursive Script titled A Carefree Excursion floats the digital Mojibake projected by Augmented Reality technology: "[The strong wind blows and gusts; towering clouds gallop] like wild horses and earth surge like dust while the small creatures sway in the wind." Digital brushstrokes are continually being generated, entangled, and disentangled from one another, connecting with both the ancient past and the future. 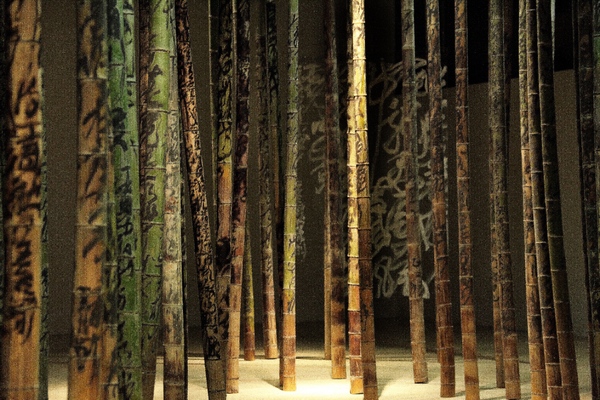 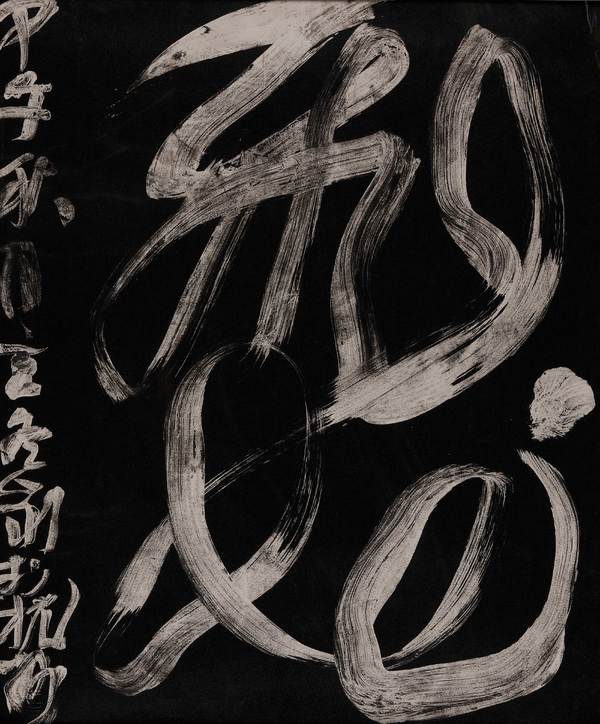 This year marks the 2,500th Anniversary for the passing of Confucius. Wang Dongling created a piece of work for this occasion, in which he calligraphed the numerous aphorisms Confucius wrote down during his journeys around the principality states at the time, on the curated walls arranged in an order reflecting Confucius' actual itinerary. The philosophy of Confucius is one of education. He embraces "teaching without distinction of classes," "not opening up the truth to one who is not eager to learn," "not helping out anyone who is not anxious to explain." His philosophy is also one of learning. He champions "acquiring knowledge through learning," "learning for the sake of applying," "acquiring new knowledge by reviewing the old," and "learning the other three corners of the subject through the one corner presented.” His philosophy is one of life. He said: "While you do not know life, how can you know about death?" 2,500 years after the passing of Confucius, Wang Dongling paid tribute to the philosophical path of Confucius through his "Big Writing". 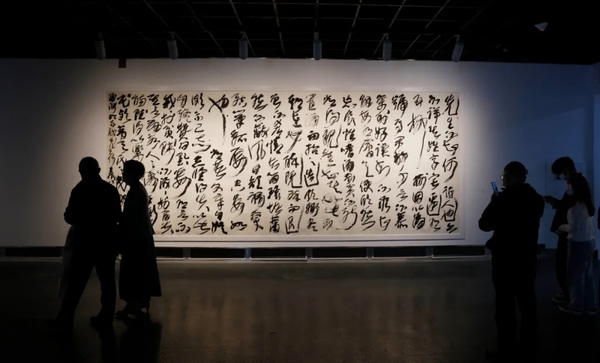 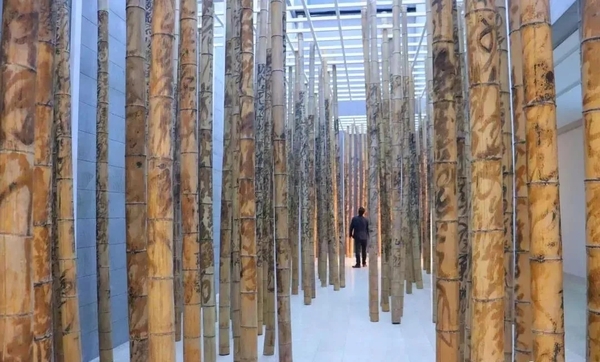 Wang Dongling discussed teaching foreign students and the enlightenment that resulted from it: "In 1981, I taught calligraphy to foreign students. Foreign students inspired me to look at calligraphy in new ways and to consider how people outside of our circle view art. My usual calligraphy practice had become too constrained and monotonous for me. I believe that new ideas should be developed to strengthen and broaden the artistic expression of calligraphy. After a conversation with a bearded Colombian student in 1983, I began "secretly" practicing modern calligraphy. "Powerful and Unconstrained (Tian Ma Xing Kong)" was my first modern calligraphy piece. I had a starting point to broaden my calligraphy skills from then on. In early 1984, through constant exploration, I began to shed the excess perfection and exquisiteness of calligraphy and progressed toward a style with a broader visual effect and sense of wholeness. At the time, European and American students approached me, telling me that Chinese calligraphy has a high status in the West; during the creation process, I was also moved by the explosive power of this unique oriental art form, and the purpose of developing calligraphy as a pure art gradually became clear." In 1990s, he personally taught at the University of Minnesota and numerous other higher institutions and actively participated in overseas academic activities on contemporary art. He said, "I've taught calligraphy at several universities in the United States, Germany, and Japan. I've taught foreign students pen and ink skills in Chinese calligraphy, but I don't want them to become "Chinese calligraphers" who can imitate classical works of famous writers such as Yan Zhenqing well. Instead, I want them to be able to wield this most basic and traditional artistic language of China once they've mastered and internalized it, so that their creativity can flourish and enrich their own artistic creation". When discussing his experience teaching calligraphy in the United States, he stressed that "some Westerners write calligraphy not to write Chinese characters, but to draw abstract images, and they learn calligraphy not to be a Chinese calligrapher, but to learn art techniques and inspiration from calligraphy to create other art.I began to realize that calligraphy is not only a dialogue with tradition, but also with the global civilization. It is not only about a dialogue with contemporary art but also with digital technology.  "

Since the new century, he personally initiated the project titled "Big Characters Travel the World," a plan to construct writing scenes of Chinese calligraphy at the most important art institutions around the globe, promoting academic communication between calligraphy and international art circle. In his view, Chinese calligraphers must proactively and confidently enter onto the scenes of international art for mutual illumination and inspiration in cross-cultural exchange. It is only by "manifesting the common through differences" that calligraphy can return to its true origin in cultural dialogues and make due contributions to the culture of humanity as a whole. As a result, calligraphy must transcend "the controversy between east and west."

For a calligraphy artist with six decades' experience, Wang Dongling always remains open-minded to emerging media technologies. In his view, a conversation with new technologies is a conversation with the future. In October 2015, Tim Cook, CEO of Apple Inc., came to Hangzhou and paid a visit to Wang Dongling to learn Chinese calligraphy from him. The event led to a heated discussion by people from all walks of life, domestically and internationally. Earlier in 2013, Wang Dongling cooperated with the renowned new media artist Jeffrey Shaw on "Big Writing." In 2020, during the global rage of Covid-19, he was invited by American director Peter Sellars to participate in the transdisciplinary art project titled “This body is so impermanent…” 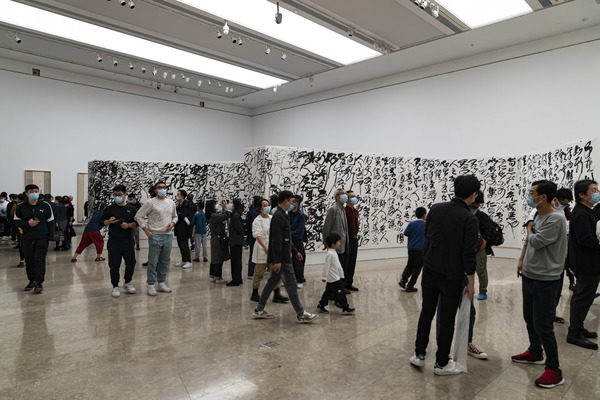 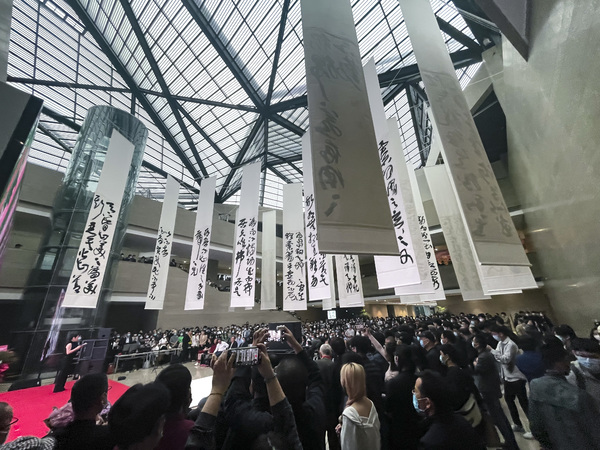 Wang Dongling was born in 1945 in Rudong, Jiangsu Province. He is currently a professor, doctoral tutor, and director of the Modern Calligraphy Research Center at the China Academy of Art (Hangzhou), as well as the life honorary chairman of the Hangzhou Calligraphers Association, the president of the Lanting Calligraphy Society, and the director of the Xiling Seal Society.

Wang was among the first batch of graduates to receive a master of arts degree from the calligraphy department of Zhejiang Academy of Fine Arts (now China Academy of Art) in 1981, and he stayed on as an instructor. He was invited by the University of Minnesota in 1989 to teach Chinese calligraphy there for four years, and he was also a visiting professor there as well as at the University of California, Berkeley (St. Trus). He returned to teach at the China Academy of Art in 1994.

His works are represented in the collections of the National Art Museum of China, the Palace Museum (Taipei), Peking University, the British Museum, the Victoria and Albert Museum, the Metropolitan Museum of Art, the Library and Archives Canada, The Art Institute of Chicago, the Vancouver Art Gallery, as well as in universities such as Harvard, Yale, Stanford, and Berkeley. 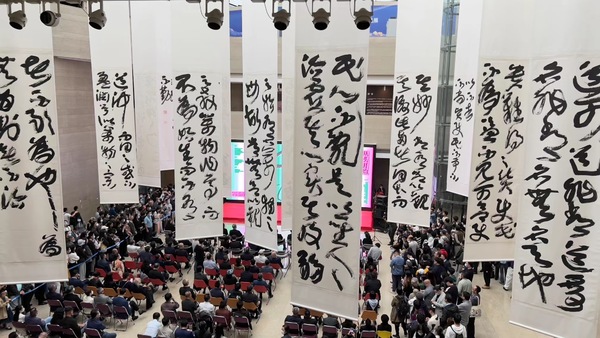